We interrupt our regular programming – literary breakfasts – to bring you a story by Licia Canton. Licia’s two previous posts Sbattutino is Love and Polenta and Radicchio: Growing Up Venetian in Montreal North were well and widely received. Licia recently read this story at the “Landscapes of Wine in Literature and Cinema” conference in Grumello del Monte, Bergamo, with vineyards in the background. She’s kindly offered to share a little of her Canadian literary fare on this site. The Italian version of “Refuge in the Vineyard” appears in the forthcoming volume  I paesaggi del vino nella letteratura e nel cinema, edited by Maria Pia Arpioni and Francesco Della Costa. Buona Lettura.

Why had she come back?

As a child she had played in the vineyard. She had roamed about freely. She knew every vine. The vines were her friends. I suoi amici. She spoke to them. Told them her secrets. She had always felt safe and protected. Never lonely. Even if she had always been alone. Every time she had needed a confidante, she came to the vineyard, stared at the sky. It was her sanctuary.

As a child she had spoken her thoughts and secrets. As an adult there was no need. They knew her. They knew her troubles. They listened.

Many years ago they had listened, they had consoled her when he whose name shall not be said, ever… ever again … he who had broken her heart, into tiny little pieces, then stomped on the pulsating bits and laughed . . . He had. He had laughed at the thought that she would never be able to make it whole again. That was pain. Pain. Dolore. She had slept in the vineyard that night decades ago.

Why had she come back?

She loved her ancestral home. She craved the vineyard but … she was a city girl, and a North American city at that.

The grass is refreshing. The beating in her temple has slowly subsided. She had rushed off at the first sign of conflict. She was not proud of herself.

Whose idea was this anyway? To come back here. She no longer belongs here. She is a city girl.

It is becoming more and more difficult to come back to visit him. There was always a story, some issue. A big one or a little one. It didn’t matter. She always fell short of his expectations.

“Non vieni mai,” he complained. She was here now.

“Non porti mai i bimbi,” he grumbled.  They were all here now.

She doesn’t visit enough, she doesn’t stay long enough when she does come. She never comes with the children. Oh God!

“Oh.” What else could she have said?

That was last year. This year, she had taken the kids to see him. And still he complained.

Whose idea was this anyway?

“We should take the kids to visit him,” her husband had said. “We should spend time with him. He’s getting old, you know. He doesn’t really know his grandchildren.” She had not responded.

She didn’t really want to.

She had raised her children on her own terms. With her husband.

After decades in Canada, her parents had moved back to the hometown in Italy. She had felt a little betrayed. She had just gotten married to a decent man, finally. They were going to have children.

“Fa troppo freddo qui.” Her parents moved back because of the weather. That’s what they said. The weather.

The cold. Il freddo. Is that a good reason to move back?

Then a few months after their return to the hometown, her mother had passed away suddenly.

Her father had not come back to Canada. He had stayed in Italy, alone. Unhappy, bitter. She had gone back repeatedly to be with him.

“Ah come on, let’s go visit him,” her husband had said.

They had planned a 30-day trek across four European countries with a side trip to visit her father. They wouldn’t stay very long. Just a few days. That’s what she knew she could handle. Her father wasn’t happy. Of course not.

“Mamma.” She hears him again. She had dozed off.

“Mamma, can I sit next to you?” the kind one asks.

“C’è posto per me.” His voice is gentle. The gentlest voice she has ever heard. He is shy and sensitive. He is especially sensitive to her moods.

He has always been so.

Back in suburban Montreal, after a busy day, she can barely sit a few moments at the dinner table.

“Can you get the water please?”

“We don’t have any more cheese.”

“What no cheese? It isn’t pasta without cheese.”

“I don’t want to eat pasta without cheese!”

“Where’s the wine? You forgot the wine. Who’s going to get the wine?”

“I’ll get it.” She gets up quickly and walks down the stairs to the cantina.

“Get a bottle of red . . .” she hears him holler as she reaches the bottom step.

“Thank you sweetheart,” he says as she places the bottle of homemade wine on the table.

She smiles a tired smile. A thank-you now and then, at least.

Moments later. The twins are picking on each other and the glass spills red onto the tablecloth.

“Quick, it’s dripping onto the floor,” her daughter hollers.

She cleans it up. She sits down again. Exhausted.

“Can I ever have a peaceful dinner!” she blurts out unexpectedly.

“You wanted four kids,” he stares at her. “Now we have four kids.” That’s his way of lightening the mood.

She doesn’t laugh. She is pooped. She is looking forward to her pillow. But it’s only 7:00 p.m. and they haven’t finished dinner yet. Then the kitchen, the lunches. The last minute homework to check, the backpacks to verify. The notes the teachers sent… someone has to read those. Four kids all in elementary school. The oldest in sixth grade, the youngest in first.

“Are you listening to me?” her husband is staring at her.

She has missed part of the conversation.

“Where were you?” he doesn’t smile. “Are you asleep at the wheel, Woman?”

She has a prompt response that she holds back. The kids are listening. She doesn’t want to cause a scene. It will escalate if she responds. She doesn’t need this now. She doesn’t have the energy. She makes the choice not to reply.

“I’m tired,” that’s all she is going to say. She looks down at her plate. She shuts everyone out.

The vineyard. If only she could beam over to the vineyard, an escape from this hectic urban challenge.

She counts to ten, and when she is sure she will not respond, she looks up to see her youngest child reaching across the table from her. His little hand is stretched to its maximum. He waits. He smiles. She puts down her fork and reaches her hand to his. The tips of their fingers touch. Zip. Zip. He makes the sound of instant energy and he smiles his shy smile.

The shape of his smile says it all: “I am giving you all of my energy. Don’t give up, I am here. I’ve got your back. Keep on going. It’ll be OK because I love you and you love me.”

She smiles at him. The others have accepted that this is their code. None of the others ever reaches over to give her energy.

And now he is standing here in her vineyard, asking if there is a spot for him in this greenery. Amid the vines, in her refuge.

“Why are you here alone, Mamma? Are you sad?”

Yes, she had wanted to be alone, but now that he is here she is happy that he has come.

“Nonno is mean. È cattivo. He said a mean thing to you. Is that why you came here? Did you run away?”

Running away has crossed her mind. Many times.

She will not run away. This little boy gives her all she needs to stay.

He holds her hand. They sit in silence, unaware they are being watched. 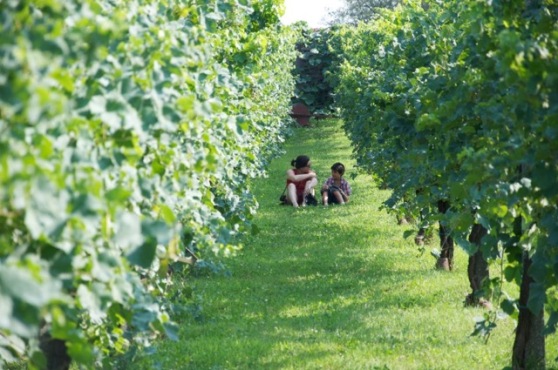 * “Do you really have four children?” he had said half-jokingly. “Maybe the photos you send at Christmas are of other children. Not yours. Those they lent you.”

My Tweets
Join 3,098 other followers